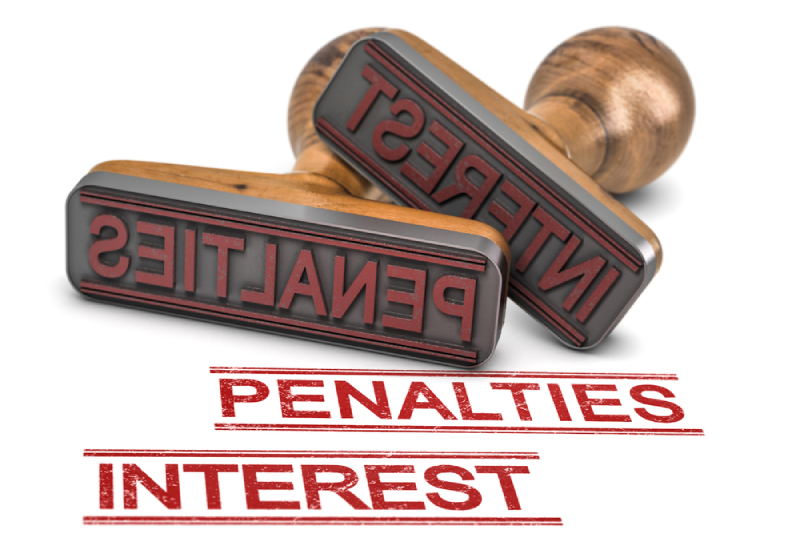 We’re slowly unburying after the May 17th federal tax deadline (though for those in Texas, Oklahoma and Louisiana — we’re still going!).

This tax season has been … long.

And I promise that I’ll soon take up non tax-related content. Goodness knows, I need a palate cleanser.

But there are still some leftover items to address for some of my readers.

You see, some people in Colorado Springs didn’t end up actually filing their taxes on time.

If that’s you (or “your friend”), and if the IRS will end up owing you money, then they’re totally OK with you delaying your claim to that refund.

But, if you owe the IRS money, then not filing your return (or an extension) by the deadline is already costing you additional penalties.

How much could it be costing you?

Five Key Tax Filing Penalties Colorado Springs Taxpayers Must Know
“What’s money? A man is a success if he gets up in the morning and goes to bed at night and in between does what he wants to do.” – Bob Dylan

There are over 150 different IRS penalties encapsulated within the federal tax code. These penalties exist to encourage everybody to be a good little taxpayer, but anybody that ever faces a surprise tax bill usually feels that the penalties just add insult to injury.

All IRS penalties are serious matters, but North Colorado Springs friends, there is one fact that is truthier than all the others when it comes to IRS penalties: Always file your tax return, even if you can’t afford to pay the tax.

If you take away nothing else from this, it should be that. Why is this so important? Read on…

Tax Filing Penalty #1: Failure to File Penalty (FTF)
If you ultimately end up filing a tax return on which you owe money to the IRS, but you file it late, the IRS is going to retroactively charge you a penalty for not filing. This penalty equals 5% per month for each month (or portion of a month, even just one day) that you filed late. There is, thankfully, a cap on this penalty, equal to 25% of the unpaid balance.

Let’s say that you owe the IRS $1,000, and you file your 2020 tax return — the one that was due last week — in the summer of 2022. Because that’s longer than 5 months, you’re automatically going to max out this Failure to File penalty, adding an extra $250 to your total tax debt.

Instead, let’s say that you file that 2020 tax return this week. As in, schedule an appointment with us right now so we can take care of it for you. The tax return will still be late, but only late by a portion of a month, so you’ll only be assessed the Failure to File penalty for one month. That 5% penalty is surely better than the 25% if you just put it off until next year, right?

There is one twist to this FTF penalty. If the tax return is more than 60 days late, a minimum penalty amount kicks in. This amount is either $435 or 100% of the tax amount you didn’t pay — whichever is less.

Our next penalty has an interesting interplay with the first one and further illustrates why you want to file sooner rather than later.

Tax Filing Penalty #2: Failure to Pay Penalty (FTP)
The IRS charges a separate, but sort of intermingled, penalty for not actually paying the balance due that you owe.

The base Failure to Pay penalty is 0.5% of the balance due. This is charged each month or portion of a month.

Here’s where things get tricky, though. If you filed your return late, and are thus subject to the Failure to File penalty, the combination of the FTF and the FTP will not exceed 5% per month. What this means is that the FTF will be reduced down from 5% to 4.5%, to give wiggle room for the IRS to charge the 0.5% FTP penalty but stay within the legal cap of 5% per month for both penalties combined. More on that in a moment.

While that may sound confusing, what’s important to remember is that the monthly penalty rate won’t exceed 5%. How generous of them, right?

There are other factors that can further adjust the Failure to Pay penalty. For example, if you set up a payment plan with the IRS, they “reward” you with a penalty reduction, dropping the FTP down to a mere 0.25%. The purpose of this is to encourage you to set up a payment plan as soon as possible.

Adjustments can also go the other direction. If the IRS sends you a notice stating that they intend to start garnishing your wages, taking money out of your bank account, or other aggressive collection action, and you still don’t pay, then the FTP jumps up to 1% from there on out.

There is a 25% legal cap on the Failure to Pay penalty.

Tax Filing Penalty #3: Combined Maximum Penalty
When you combine both the Failure to File and Failure to Pay penalties, it gets really ugly, really fast. Remember, the FTP penalty has a legal 25% cap. But if you also owe the Failure to File penalty in the same months, it’s reduced by 0.5% for up to 5 months. That’s a total 2.5% reduction in the FTF if you owe both.

On a hypothetical $1,000 balance due, this means you’ll actually end up owing $1,475 after maxing out both penalties.

Tax Filing Penalty #4: Estimated Tax Penalty
Here in the United States, we have what is called a “pay as you go” tax system. This means that the IRS expects everybody — both individuals and businesses — to pay their taxes in more or less equal installments throughout the year.

In some situations, you may not have enough income tax withheld from your paychecks. This can happen when you get a promotion and pay raise, but don’t change your W-4. This can also happen when you get paid bonuses, or if you have a “side hustle” that generates some self-employment income.

While this penalty is fairly small — less than 2% of your estimated tax underpayment for a year — it’s calculated and added to your balance due before taking into consideration the Failure to Pay and Failure to File penalties discussed above.

If you receive a promotion or bonus, take on gig economy work for extra money, or you or your spouse start a small business in Colorado Springs, definitely be sure to talk to us so that we can calculate the minimum tax you should be paying throughout the year in order to avoid this penalty.

Tax Filing Penalty #5: Interest — Kicking You When You’re Down
This one just goes beyond the “insult to injury” cliche. In addition to charging you interest on the unpaid balance, the IRS also charges interest on the penalties.

The current interest rate is 3%, and is adjusted on a quarterly basis. Oh, and this compounds (wait for it) … daily.

If these penalty charges and daily compounding interest don’t scare you, then I don’t know what will. Fortunately, we’re still in the first monthly portion on which the IRS whacks you with penalties, so there’s still time for you to keep the tax filing penalties to a minimum.

Colorado Springs friends, let’s get your return filed and create a plan for addressing the balance due:
719-260-0320

To getting things done,